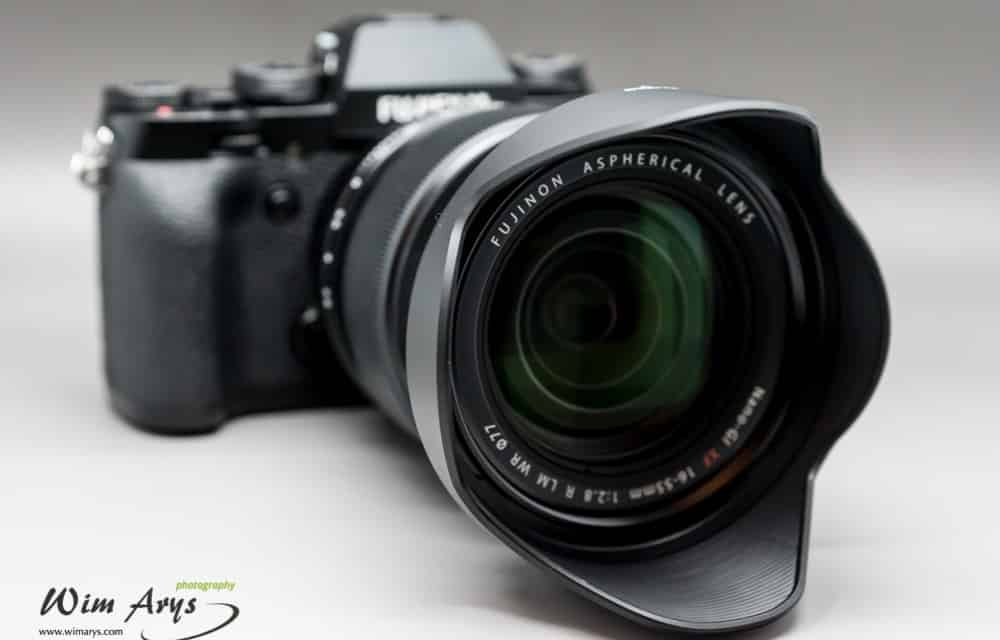 The Fujinon XF 16-55 mm f/2.8 R LM WR is a standard zoom lens with a field-of-view equivalent to around 24 mm to 84 mm on a full-frame camera. It offers a constant f/2.8 aperture throughout the range, and the optical design controls various forms of aberration to achieve excellent edge-to-edge sharpness across the entire zoom range.

Nine rounded aperture blades create a smooth, circular bokeh. The suppression of spherical aberration contributes to a beautiful bokeh at all focal lengths.

Fujifilm’s HT-EBC (High Transmittance Electron Beam Coating) is applied to the entire area of the lens surface to counter ghosting and flare. It also has their Nano-GI (Gradient Index) coating technology, which alters the refractive index between glass and air, ghosting and flare are reduced for diagonal incident light. I tried shooting straight into the sun last weekend, no ghosting or flare visible with this lens. It also makes beautiful sun stars, even at large apertures. By combining this lens with an X Series camera body with Lens Modulation Optimiser (LMO) technology, the performance of the lens is improved even further. LMO corrects diffraction to produce images with edge-to-edge sharpness and create a realistic three-dimensional effect, even at small apertures. 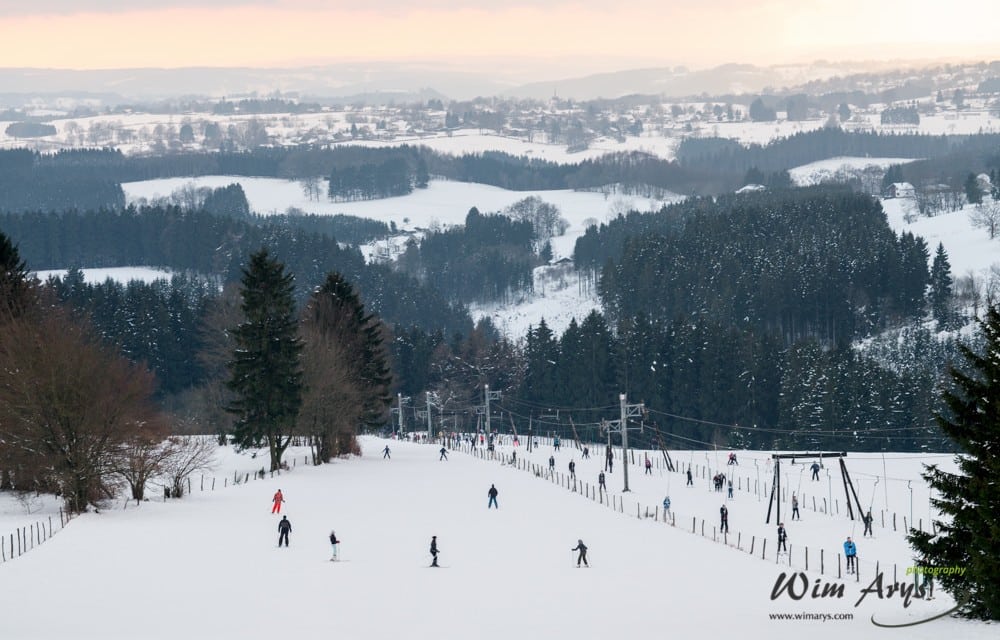 By reducing the weight of the focus lens and mounting the Twin Linear Motor, high-speed, quiet AF is possible. The fastest AF speed of 0.06 seconds brings comfort to your photo-shoot when by combining this lens with an X Series camera body* offering Phase Detection AF. Photos can be taken unnoticed in quiet locations thanks to the silent shutter. The latest XF lenses do focus faster than the earlier XF lenses. If you have any problems targeting with the XT1, make sure ‘high-performance’ and face recognition is on in the menu system. 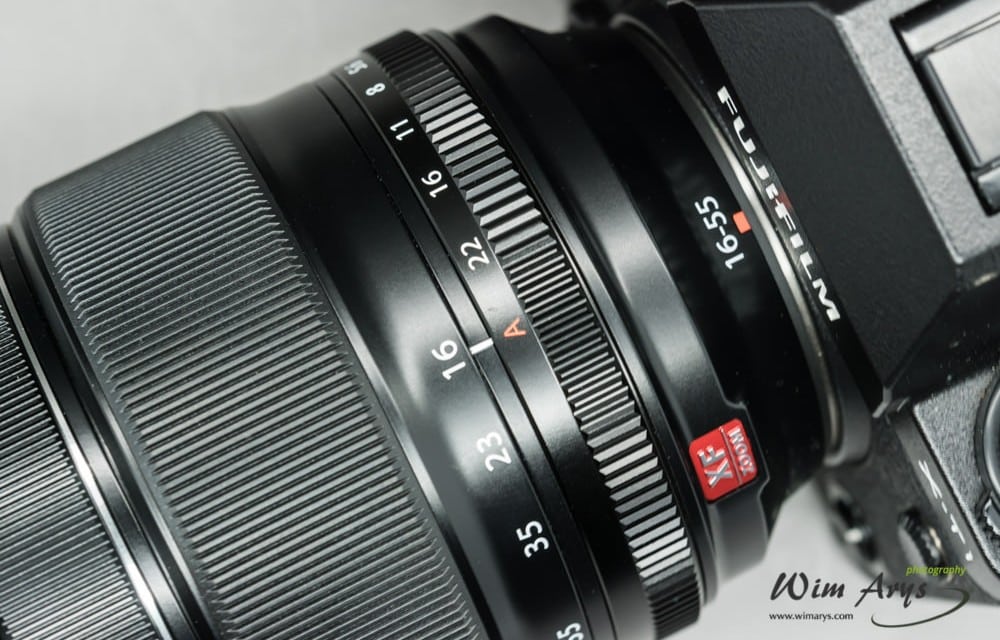 This lens feels excellently constructed, all metal parts with a beautiful matte finish to match the XT1. The aperture ring clicks from automatic to manual, a standard feature in X-mount lenses, but it is not as prone to accidental changes as with the XF 50-140. The rubber focus ring feels smooth and pro quality, no complaints here. The petal shaped hood is made from plastic, and I would prefer Fuji including a better quality one in the future. 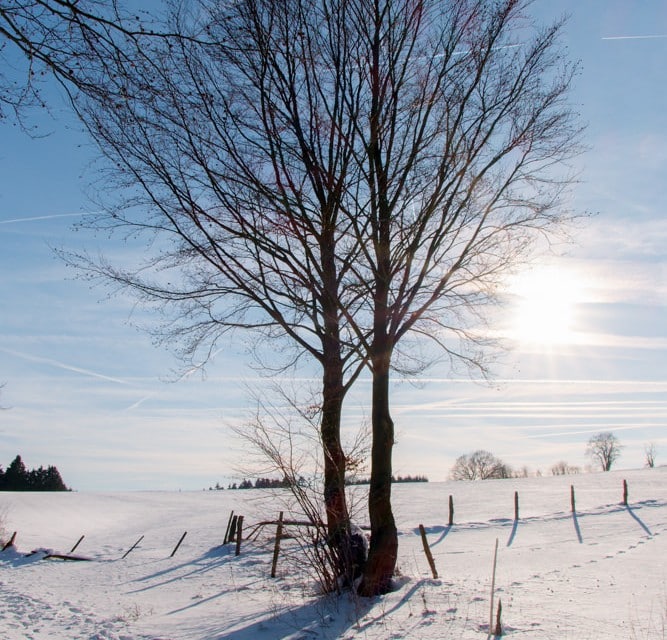 The XF1655 has weather seals at each portion of the barrel, making the lens weather- and dust-resistant. Specs claim down to -10°C low-temperature operation, like the Fujifilm X-T1, which has the same levels of protection. I’ve been shooting both in -5° Celsius, rain and snow without any problems, except that the viewfinder on the XT1 sometimes fogs-up when going from extreme cold to room temperature. 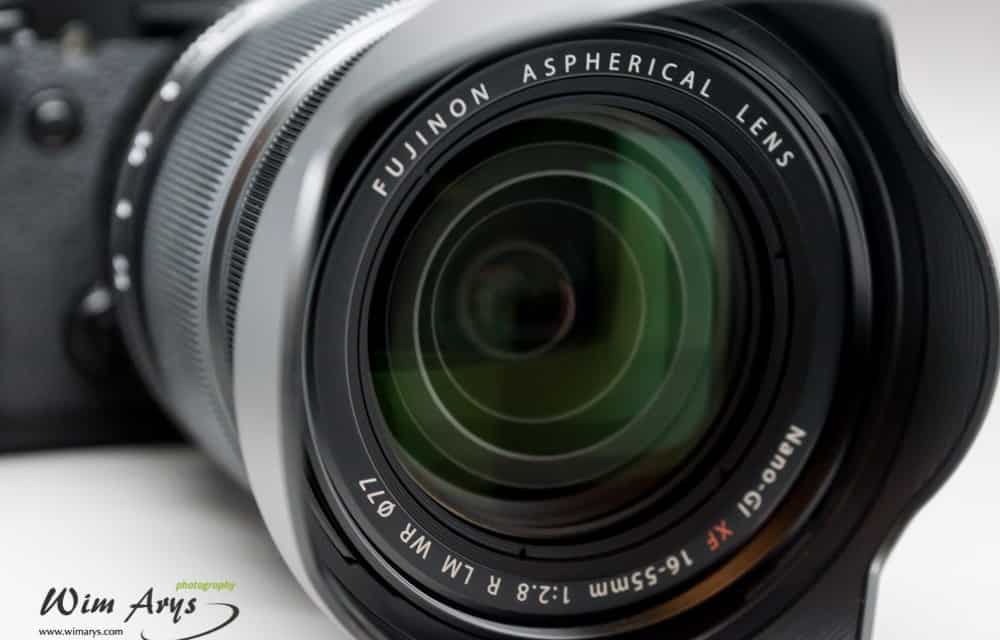 A word about my studio performance test

These are RAW images imported into Adobe Lightroom and exported as JPEG untouched. I’m using a 400 dpi test chart for these test. Lens is on a parallel plane to the test start. I have to constant studio lights illuminating the test chart on the left and right of the camera. Fuji X-T1 is mounted on a sturdy tripod. ISO is at 200. I’m using the 2 second timer function to ensure there is no camera shake.

I’m not claiming to have the accuracy that a testing laboratory like DXO has. Nor am I using any test programs to determine any values automatically. I’m visually inspecting the captured images at different apertures and focal lengths and writing down my conclusions. This process is subjective, so any conclusions drawn are purely indicative. I’m looking for general trends here, mainly to indicate at what aperture you’d get the best performance out of this lens, and if there are any issues you’d want to be aware of.

Sharpness, distortion and Vignetting at 16mm

There is slight barrel distortion visible at 16mm, although this seems very much under control for a medium zoom.The same goes for a slight hint of vignetting, but I doubt that this will be visible in real life shooting.

The XF 16-55 is already tack sharp in the centre at f/2.8, with the corners not falling far behind. Edge performance reaches maximum sharpness at f/5.6-f/8. Loss of sharpness due to diffraction sets in beyond f/11, though you should still be able to pull this into focus in Iridient or any other descent RAW editor.

Sharpness, distortion and Vignetting at 22mm

Vignetting has totally disappeared at this focal length. There is still a very small amount of curvature due to barrel distortion visible in straight lines, but just like at 16mm, nothing to worry about even for landscapes or architecture.

Although very decently sharp at f/2.8, you’ll need to step down to f/4 to get the centre as sharp as possible. Corners follow this trend and need an extra stop to achieve maximum sharpness. Diffraction sets in around f/13.

Sharpness, distortion and Vignetting at 35mm

There is no vignetting or distortion visible at the 35mm focal length. The XF 16-55 needs just one stop from f/2.8 to achieve optimal sharpness in both centre and corners at 35mm.

Diffraction, as with all other focal lengths sets in beyond f/11. CA seems very much under control for a zoom lens, impressive.

Sharpness, distortion and Vignetting at 47mm

No visible distortion nor vignetting at this focal length. The Fujinon XF 16-55mm also achieves maximum sharpness in the centre and corners already at f/2.8. Sharpness deteriorates beyond f/11 due to diffraction.

Sharpness, distortion and Vignetting at 55mm

No distortion or vignetting at 55mm. Very sharp in both centre and corners at f/2.8, diffraction visible beyond f/11.

A 16-55 mm f/2.8 zoom will never replace a fast prime like the XF 56 mm f/1.2, but then again a standard zoom is always a lot more flexible than a prime. Especially when it’s a zoom with overall fantastic linear performance at all focal lengths like this one. Let’s have a look at sharpness at the fastest shared aperture f/2.8 on both lenses.

Although both lenses render differently, in terms of sharpness the XF1655 fares at least as well as the XF56 at f/2.8, giving merit to Fuji’s claims of a zoom with prime performance.

In terms of Bokeh, the aestethic quality of the out of focus area, the is no beating the XF 56mm even at f/2.8. The 16-55 mm does have a 10 cm shorter focussing distance, and the latest XF lenses do seem to focus faster.

It won’t surprise anyone that the Fujinon XF 16-55 wins in terms of image quality and sharpness, but the XF 18-55 still has built-in optical image stabilisation giving you at least 4 stops of advantage, negating the loss of one stop at the far end. This meaning in terms of speed, not in terms of DOF or Bokeh, but in circumstances where speed is necessary, we all prefer an in-focus image to the best ‘bokeh’. The Fuji X-T1 has been adopted by many professional photographers and they seem keen on keeping even the most demanding pros happy. Fuji was already renowned for their nice range of lenses, and anyone who has switched to another brand will tell you that’s the main thing they miss.

It’s astonishing that they actually keep improving on the XF lens range designs and this is clearly noticeable in terms of features and performance. Now let’s get the elephant out of the room : there is no optical image stabilisation incorporated in this lens. Yes this will hurt sales, and I would have preferred it to be included in the XF1655, just because it would have made it even easier to use. I’m spoiled with the general performance of the XF 50-140 tele-zoom, where I rarely have a missed shot thanks to that OIS image stabilisation.

You do need to take more care when focussing with the Fujinon XF 16-55 if you don’t want to have too many missed shots. Incorporating an image stabilisation system would probably have increased size, weight and price, but that would not have been a real issue for me personally. OK, this zoom is already quite large, and perhaps at the limits of what you’d expect from a mirror-less system, but it is still very compact compared to DSLR lenses. Fujinon already have an excellent fast travel zoom in the XF1855 which does feature OSS, so perhaps the thinking is that the system was in need of a prime quality zoom for studio, architecture and landscape work. There is no doubt that they have achieved this. The XF lens range is now complete, and there is even some overlap starting to happen.

It terms of optical performance, the Fujinon XF 16-55 is as good as it gets in the mirror-less world. There is little or no distortion and vignetting (only really visible at 16mm), very sharp in the center at f/2.8 across the range and the corners sharpen-up nicely at around f/5.6.

Is it right for you? If you require optimal performance from a standard XF zoom, you do need this lens. It would be great for studio, portraiture and even some landscape work. If you’re not in the market for a $1200 zoom, the XF 18-55 f/2.8-4 offers fantastic performance at a very low price.